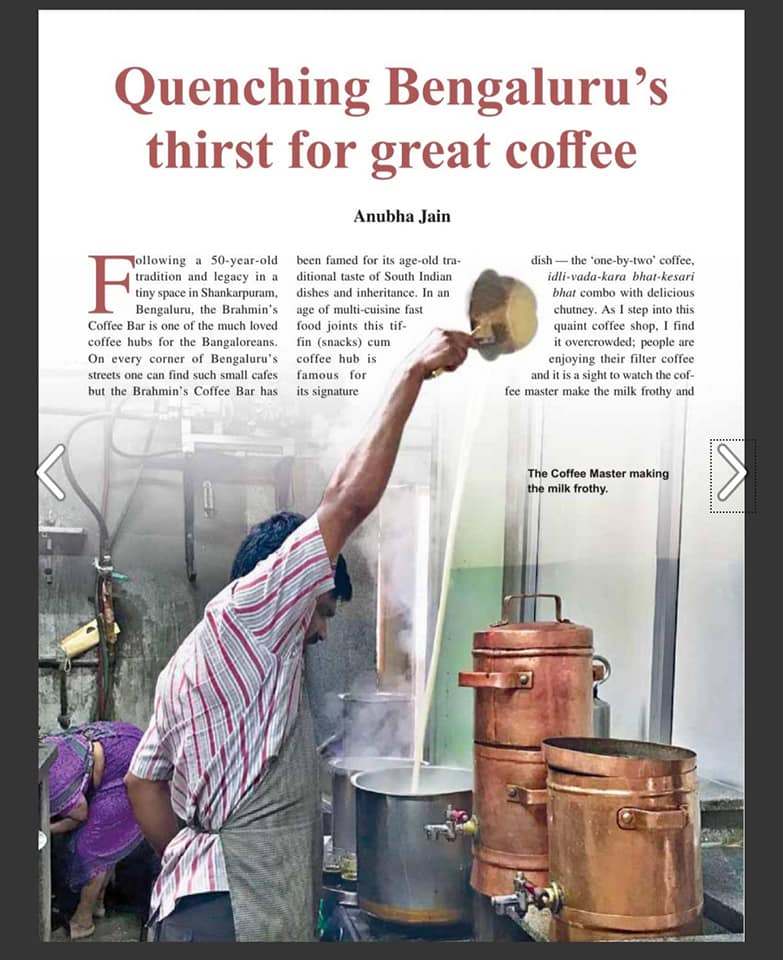 Photo feature in Rotary International Magazine’s may 2020 recent issue.
Pg 55-56 of the given below link https://rotarynewsonline.org/rotary-news-may-2020/

Photo feature in Rotary International Magazine’s may 2020 recent issue. Pg 55-56 of the given below link https://rotarynewsonline.org/rotary-news-may-2020/

Following more than 50-year old traditional value and legacy in a tiny space of Shankarpuram Brahmin’s Coffee Bar is one of the much loved coffee hubs for Bengalureans. On every corner of Bengaluru’s streets one can find such small cafes but Brahmin’s Coffee Bar has been famed for its age old customary taste of south Indian dishes and inheritance. In a world of inter-continental fast food joints this tiffin (snacks) centre cum coffee hub is famous for its iconic one-by-two coffee, Idli-Vada-Kara Bhat-Kesari Bhat with delicious chutney. One fine morning at 6:30 am while morning walk when I entered in the space it was overcrowded and people were enjoying filter coffee that was being served by the coffee master who was mixing milk almost as high as half the ceiling and churning out coffee tumbler after tumbler. In a designated corner of this small establishment was another staff member whose role was to keep serving just the chutney. I was amazed to see that as the traditional South Indian style no sambhar/rasam was being served with any of the dishes here. People were eating food in a tiny hall with self-service system and a standing table arrangement just outside the hall. Brahmin’s, a family run small business with over 14 employees has today become the talk of the town. A landmark of the venture is that it opens 6 in the morning and runs till 12 in the afternoon and in evening only from 3 pm till 7pm. Employees of the joint start making fresh food stuff at 4 am everyday so that they can serve customers at 6 in the morning. Recalling the history, owner Radha Krishna Adiga of Brahmin’s says, “In the year 1935 my father K.V. Nageshwar Rao along with my mother K.N. Saraswati from Udupi district in Karnataka for their survival started selling some South Indian dishes on the streets of Bengaluru.” On Jan. 27, 1965 Rao and his eldest son N.Shankarnarayan commenced a small venture with the name of ‘Brahmin’s Coffee Bar’. K.V. Nageshwar Rao’s wife started selling Kara Bhat (Upma) with chutney and that became one of the best selling products of the venture. In the year 1970 on public demand and with increasing popularity a few more items added in the menu like vada, idli and a sweet dish like Kesari Bhat. Since 1972 Radhakrishna Adiga, son of Rao started running the venture. The unique selling point of this small joint is the consistent same taste that has been maintained since 1965 with good quality stuff being served here. In 1965 this venture was famous for its home cooked food. Today, many customers in and around Shankarapuram and Basavangudi take parcels home (with plenty of chutney). Working on the philosophy of people change but we don’t change, Adiga says, “To maintain age old tradition and follow the legacy we believe in the philosophy of consistency. 90% of my clients are coming from the initial years and I know them by their name and faces.” Despite so much of competition in the market Adiga never think about it rather gave importance to the quality of the food being served in his joint. He says, “From 1995 onward due to the global economy and boom in the IT software industry people were started migrating to Bengaluru. Seeing the sumptuous taste and consistency in our food items Brahmin’s Food Joint is still running as one of the favorite food joints of the town, he added.” With Brahmin’s success other similar south Indian food joints are running with similar names; but people too are very smart as they are well acquainted with the taste of Brahmin’s original and authentic food stuff. With longstanding quality and taste this food joint is giving tough competition to other similar south Indian food spaces. Faithful customers for decades drive long distance on weekends just for their love of Brahmin’s filter coffee and chutney.