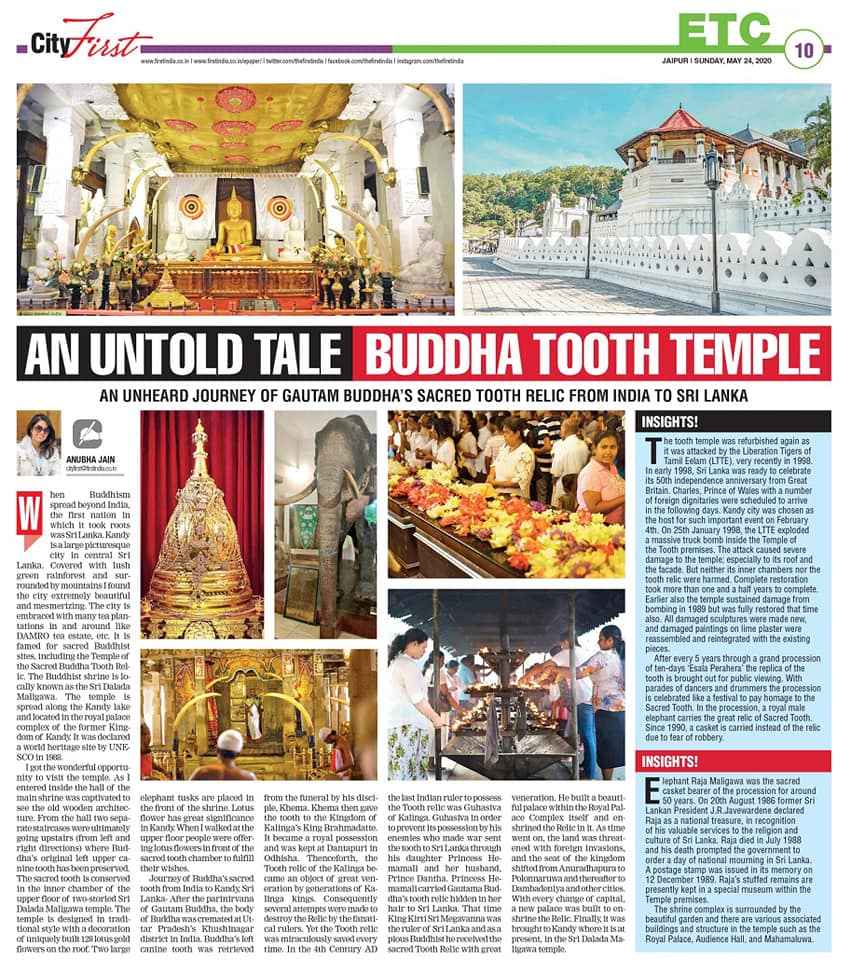 When Buddhism spread beyond India, the first nation in which it took roots was Sri Lanka. Kandy is a large picturesque city in central Sri Lanka. Covered with lush green rainforest and surrounded by mountains I found the city extremely beautiful and mesmerizing. The city is embraced with many tea plantations in and around like DAMRO tea estate, etc. It is famed for sacred Buddhist sites, including the Temple of the Sacred Buddha Tooth Relic. The Buddhist shrine is locally known as the Sri Dalada Maligawa. The temple is spread along the Kandy lake and located in the royal palace complex of the former Kingdom of Kandy. It was declared a world heritage site by UNESCO in 1988.

I got the wonderful opportunity to visit the temple. As I entered inside the hall of the main shrine was captivated to see the old wooden architecture. From the hall two separate staircases were ultimately going upstairs (from left and right directions) where Buddha’s original left upper canine tooth has been preserved. The sacred tooth is conserved in the inner chamber of the upper floor of two-storied Sri Dalada Maligawa temple. The temple is designed in traditional style with a decoration of uniquely built 128 lotus gold flowers on the roof. Two large elephant tusks are placed in the front of the shrine. Lotus flower has great significance in Kandy. When I walked at the upper floor people were offering lotus flowers in front of the sacred tooth chamber to fulfill their wishes.

Journey of Buddha’s sacred tooth from India to Kandy, Sri Lanka- After the parinirvana of Gautam Buddha, the body of Buddha was cremated at Uttar Pradesh’s Khushinagar district in India. Buddha’s left canine tooth was retrieved from the funeral by his disciple, Khema. Khema then gave the tooth to the Kingdom of Kalinga’s King Brahmadatte. It became a royal possession and was kept at Dantapuri in Odhisha. Thenceforth, the Tooth relic of the Kalinga became an object of great veneration by generations of Kalinga kings. Consequently several attempts were made to destroy the Relic by the fanatical rulers. Yet the Tooth relic was miraculously saved every time. In the 4th Century AD the last Indian ruler to possess the Tooth relic was Guhasiva of Kalinga. Guhasiva in order to prevent its possession by his enemies who made war sent the tooth to Sri Lanka through his daughter Princess Hemamali and her husband, Prince Dantha. Princess Hemamali carried Gautama Buddha’s tooth relic hidden in her hair to Sri Lanka. That time King Kirti Sri Megavanna was the ruler of Sri Lanka and as a pious Buddhist he received the sacred Tooth Relic with great veneration. He built a beautiful palace within the Royal Palace Complex itself and enshrined the Relic in it. As time went on, the land was threatened with foreign invasions, and the seat of the kingdom shifted from Anuradhapura to Polonnaruwa and thereafter to Dambadeniya and other cities. With every change of capital, a new palace was built to enshrine the Relic. Finally, it was brought to Kandy where it is at present, in the Sri Dalada Maligawa temple.

The tooth temple was refurbished again as it was attacked by the Liberation Tigers of Tamil Eelam (LTTE), very recently in 1998. In early 1998, Sri Lanka was ready to celebrate its 50th independence anniversary from Great Britain. Charles, Prince of Wales with a number of foreign dignitaries were scheduled to arrive in the following days. Kandy city was chosen as the host for such important event on February 4th. On 25th January 1998, the LTTE exploded a massive truck bomb inside the Temple of the Tooth premises. The attack caused severe damage to the temple; especially to its roof and the facade. But neither its inner chambers nor the tooth relic were harmed. Complete restoration took more than one and a half years to complete. Earlier also the temple sustained damage from bombing in 1989 but was fully restored that time also. All damaged sculptures were made new, and damaged paintings on lime plaster were reassembled and reintegrated with the existing pieces.

After every 5 years through a grand procession of ten-days ‘Esala Perahera’ the replica of the tooth is brought out for public viewing. With parades of dancers and drummers the procession is celebrated like a festival to pay homage to the Sacred Tooth. In the procession, a royal male elephant carries the great relic of Sacred Tooth. Since 1990, a casket is carried instead of the relic due to fear of robbery.

Elephant Raja Maligawa was the sacred casket bearer of the procession for around 50 years. On 20th August 1986 former Sri Lankan President J.R.Javewardene declared Raja as a national treasure, in recognition of his valuable services to the religion and culture of Sri Lanka. Raja died in July 1988 and his death prompted the government to order a day of national mourning in Sri Lanka. A postage stamp was issued in its memory on 12 December 1989. Raja’s stuffed remains are presently kept in a special museum within the Temple premises.

The shrine complex is surrounded by the beautiful garden and there are various associated buildings and structure in the temple such as the Royal Palace, Audience Hall, and Mahamaluwa.