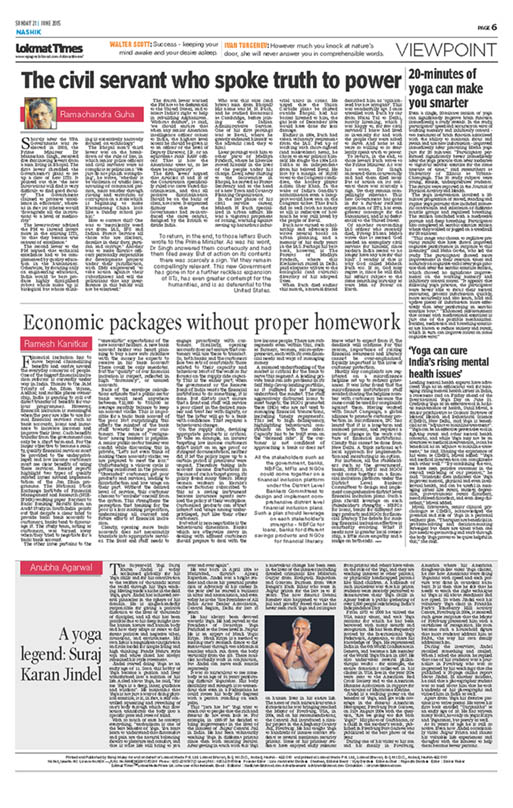 Jindel is a walking poster on the benefits of Yoga, and got wide coverage in the famous American Newspaper, Pittsburg Post Gazatte, on 31st August 2004 with the question, “Are we going too fast with Yoga?”  His photo of Garbhasan, or a child in the mother’s womb, published in Pittsburg Post Gazatte was publicized as the best photo of the year.

92 years old Yogi Suraj Karan Jindel has acclaimed globally for his Yoga skills and for his contribution to the welfare of thousands across the world through his Yoga teaching. Having made a niche in the field Yoga, guru Jindel has achieved several pinnacles in the sphere of his domain. He is singlehandedly responsible for giving a positive direction to the lives of thousands of disciples, and all this has been possible due to his deep insight into the human nature and human body and how they adapt or react to different positive and negative vibes, situations, and environment. His own life is a magnificent inspiration and role model for simple living and high thinking. Pandit Nehru style topi and white shawl has always remained his style statement.

Jindel started doing Yoga at an early age of 11. Soon this hobby of Yoga became a passion and later transformed into a mission of his life. Asked about Yoga, he said, “For me Yoga is a deep, inner, guidance and wisdom”. He maintains that Yoga is not just a way of doing physical exercise, it is, in fact, a self controlled squeezing and stretching of one’s body through which this slow action transforms the body into a specific pose and state of mind.

With so much of ease he conveys everything, “enthusiasm is one of the best benefits of Yoga. You must learn to understand that discomfort and pain are the natural balancing factors to pleasure and comfort, and that is what life will bring to you over and over again”.

He was born in April 1924 at Nasirabad, District Ajmer, Rajasthan. Jindel was a bright student and chose his paternal profession of Advocacy as his career. In the year 1947 he started a business in arms and ammunition, and even today he is the Vice President of All India Arms Dealer Association, Central Region, Delhi for last 15 years.  He has always been devoted towards Yoga. He had served as the President of Swasthya Yoga Parishad at the State level in Jaipur. He is an expert of Nauli Yogic Kriya.  Nauli Kriya is a method to making one’s stomach dance to different tunes through two abdominal muscles which run down the body vertically from the rib. These muscles normally work in conjunction, but Jindel can move each muscle separately.

It was so miraculous to see somebody at an age of 91 years performing difficult Yogasanas. His body flexibility and strength is so tremendous that even in a Padmasana he could rotate his body 360 degrees with a person standing on each palm.

This “jara hat ke” Yogi tries to reach out to people that the rich and famous do not even look at. For example, in 1996-97 he decided to bring improvement in the lives of the inmates of Jaipur Central Jail in India. He has been voluntarily teaching Yoga in different prisons since then with amazing results. After getting in touch with this Yogi a marvelous change has been seen in the lives of the inmates including dreaded criminals like Malaram Gurjar from Kothputli Rajasthan and Gautam Burmen from West Bengal’s Kuch Bihar who were in Jaipur prison for the last 14 to15 years. The now famous Swami Ramdev also happened to visit the jail and proudly stated that he has never seen such Yoga and its impact on human lives in his entire life.

The news of such miraculous transformations he was bringing reached the Mayor of Pittsburg, USA, in 2004, and on his recommendations, the Central Jail introduced a similar project in the Allegheny County Jail, Pittsburg. He has taught Yoga to hundreds of inmate convict students at several maximum security prisons. Some of his prisoner students have enjoyed early releases from prisons and others have taken on the role of the Yogi, and they are teaching inmates at other prisons, or physically handicapped persons like blind children.

A hallmark of such initiatives was that his prison students were recently permitted to demonstrate their Yoga skills before a public gathering in Ajmer of over 2,500 people celebrating India’s Independence Day.

From 1973 to 2008 he visited the USA many times, and took Yoga sessions for which he has been bestowed with many awards and recognition. He has been frequently invited by the International Yoga Federation, Argentina, to share his knowledge of Yoga. He represented India in the 6th World Conference in Geneva, and became a life member of the World Yoga Union in 1997. He also undertakes several philanthropic works – for example, the entire donations collected in his classes in USA late in the year 2004 were sent to the American Red Cross Society and to the American Humane Association in support for the victims of Hurricane Katrine.

During one of his visits to his son and his family in Pittsburg, America where his American daughter-in-law takes Yoga classes, he saw how Americans were doing Yogasans with speed and each posture was done in countless numbers. It is then that he felt that he needs to teach the right technique as Yoga is all about steadiness and not speed. So when Jindel took his voluntary Yoga class in Franklin Park’s Blueberry Hill activity Centre, Pittsburg in 2004, it received such great response that the Mayor of Pittsburg presented him with a certificate of recognition. He soon became such a household figure that most students address him as PAPA, the way his own family addresses him.…

During the interview, Jindel recalled something and smiled. When I asked the reason he replied that one of his students was a Journalist in Pittsburg who was so impressed by his teachings that she published a 35 page online report about Jindel. In another incident, he said that a photographer student was so mad about him that he took hundreds of his photographs and visited him in India as well.

Apart from Yoga his favorite pastime is to write poems. He wrote his first book entitled SURPANKHA at an early age of 18. He has written many books, not only on yogic Kriya and Yogasanas, but poetry as well.

At 92 years of age he still does Yogasanas to make himself fit and healthy. Even now Jindel occasionally visits Jaipur Prison and shares his valuable life experiences and thoughts with the inmates to help them become better persons.