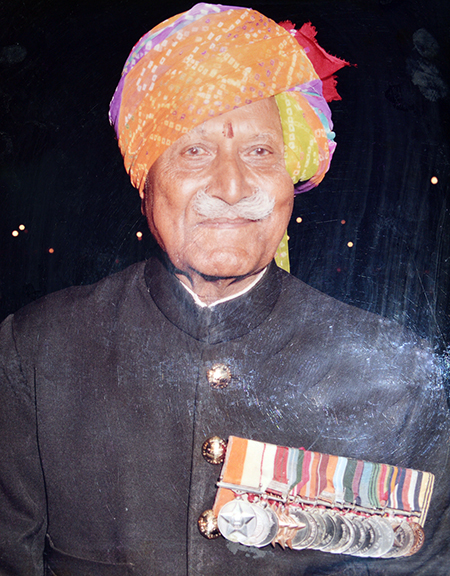 Year 1947 is the golden year in the Indian history – our Nation became free after a long non violent independence movement; the ruling Britishers left Hindustan but unfortunately divided our nation into two countries – India and Pakistan. The partition witnessed painful violence, and the two countries were engaged in many wars against each other. The wars in 1947-48, 1965, 1971, and 1999 witnessed the death of many innocent people.

The 1965 Indo-Pak war has completed more than 50 years…during this war about 3,000 Indian soldiers were martyred out of which 183 soldiers belonged to the warriors’ land of Rajputana. I.C. 6596 Brigadier Raghuveer Singh Rajawat was one of those gallant army men who fought in  this war and  became the second Rajasthani warrior who was rewarded with the prestigious Gallantry Award, the Mahavir Chakra, for his bravery and leadership in Aasal Uttar War with Pakistan in 1965.

On 2nd Sept 1965 Lt. Colonel Raghuveer Singh was on his way to meet his family in Rajasthan and while travelling when he was at Rewari Station, he got the news of cancellation of his leave due to an announcement of an Indo-Pak war.  Without wasting any moment, he reached Solan, Himachal Pradesh as ordered and took charge as the leader of the 18 Rajputana Riffles. On 4th Sept. Raghuveer Singh and his battalion was ordered to take position in Punjab’s Khemkaran sector against Pakistan’s armed forces. Under Raghuveer’s command, the Indian forces repelled the pakinstani forces as is mentioned in his Mahavir Chakra Citation, “In the Khemkaran and the Aasal Uttar sector war the rival force attack was extremely violent. However, Indian soldiers fearlessly confronted the Pakistan’s army attack and destroyed 22 Patton Tanks of the rival force. Under the leadership of Raghuveer Singh, on 9th Sept. 1965, his battalion successfully accomplished the mission and kicked out Pakistan’s army who had the suspicious motive of reaching India’s Harike, Punjab.”

For achieving this grand success, the then President of India Dr. S Radhakrishnan honored Raghuveer Singh with the second highest gallantry award of the country, the Mahavir Chakra. The then Chief Minister of Rajasthan Mohanlal Sukhariya ji hosted a grand dinner to honour this grand success which was attended by many dignitaries and ministers. His highness of Jaipur, Maharaja Sawai Man Singh, presented a sword to Brigadier Singh as a token of honour.  Likewise, Emperor Harish Chandra of Jhalawar also honored Singh.

Brigadier Raghuveer Singh effectively handled the post of Provost Marshal in Military Police with the responsibility to look after 1 lac Pakistani soldiers in the Bangladesh Surrender Camp.

Raghuveer had also taken part in the World War II (1942-1974). Not only did he fight wars, his services were marshaled around the world as a peace keeper also. He has provided his services not only in different parts and states of India but also in the high postings of United Nations Commission’s peace keeping forces as well. During the war of North and South Korea in the year 1954, he was appointed in the peace keeping force as the Major General of his battalion. Likewise, during Israel and Egypt war in 1959, he was the staff officer in the Peace keeping force for almost one and a half years. In 1944, Raghuveer Singh participated in Burma war and went to Japan to fight against the Britishers.

He fought against Pakistan’s army just after independence in 1947-48 in Urri Sector of Jammu & Kashmir. The war took place at a height of 15,000 feet.

94 years Singh is quiet disturbed with the current India Pakistan situation. He says, “Situation is so tense and worse between both the nations. For the development and peace, India and Pakistan need a permanent solution.” As told to Anubha Agarwal