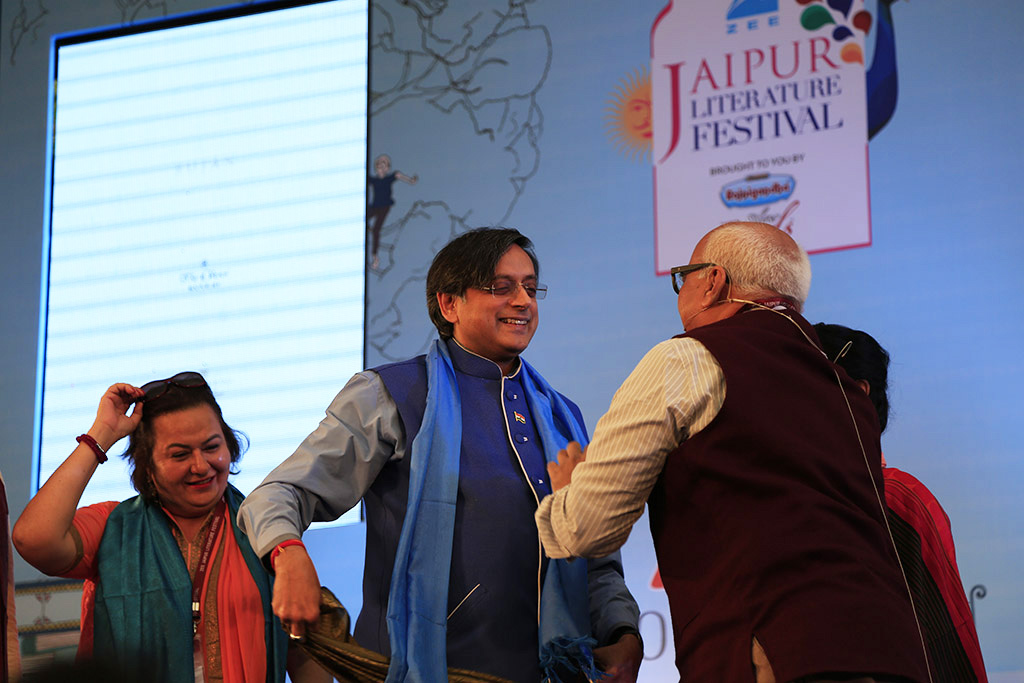 The ZEE Jaipur Literature Festival is India’s Vibrant, thought provoking and the most diversified festival of literature with a retreat to refresh mind through the words of wisdom from acquainted authors and writers.

Jaipur, on its own, is a city of joy and colors with majestic palaces, forts, archways and traditional Rajasthani culture and it radiant more into an explosion of color, excitement and festivities as the Literature Festival begins.

The festival, which started in 2006 has only since rising each year, pulling in ever expanding crowds to listen in intellectual sessions of the most impressive line ups of authors and speakers from all over the world. Novelists, Nobel Laureates, Pulitzer Prize winning authors and journalists, Man Booker Prize winners and even personalities and public figures like Oprah Winfrey and His Holiness, the XIV Dalai Lama have held sessions over the five-day festival over the years, and each coming year just seems to beat the previous.

This year the festival started with a note to a vibrant mix of sessions focusing on privacy, the environment, big personalities and moving personal stories and everything in between.

The Chief Minister of Rajasthan, Shri Vasundhara Raje warmly welcomed the audience and inaugurated the event. Scindhia described the Literature Festival as ‘the greatest equalizer’. She recalled her lifelong passion for books, and how she used to read in secret under the covers and thanked all writers for being ‘the creators of dreams.’ Scindia expressed her delight that the festival showcased Jaipur and Rajasthan to the world, urging the audience to ‘ENJOY JAIPUR, ENJOY THE FESTIVAL, AND COME BACK AGAIN AND AGAIN’.

On the very first day the literary festival opened to a packed audience at the Front Lawn, which filled with the spellbinding performance by classical singer Gaayatri Kaundinya, followed by a highly atmospheric performance of traditional Rajasthani folk music, including a rousing fanfare of ceremonial drumming and horns, led by Nathoo Lal Solanki and Chugge Khan.

Margaret Atwood held the audience spell bound with the opening keynote address ‘Writing is the means whereby light is shed on darkness. There are many darknessess but also many voices.’ Atwood expressed her excitement to be visiting India, observing that Indian culture is unique, due to its extreme variety and multiculturalism. She found it fascinating that two citizens of India who don’t speak the same language can still talk to each other in a third.

A packed crowd at Char Bagh Tent looked more anticipated when much-loved author Ruskin Bond’s appeared at the Festival in a session which was funny, poignant, and heart-warming. Ruskin Bond talked about his life as a young boy, finding his way into writing and gave the audiences tips for a rich life.

The inspiring life of Subhash Chandra, chairman of ESSEL Group and ZEE, provided a perfect example of how perseverance and belief can lead you to achieve big ambitions. Chandra threw a fascinating light on how he developed his business acumen, and grew an empire from such small beginnings, facing enormous challenges along the way.

On the second day the session on Indian sports among a cricket legend Anil Kumble, a football genius Baichung Bhutia and two sports writers enthralled the audiences.

Jaipuriets were mad to hear renowned Journalist, story teller, anchor Barkha Dutt on her book launch entitled: this unquiet land. The session was become more exciting as the host was remarkable writer Shobha De. While talking about her book Dutt informed that it’s an incredibly frank and unflinching portrayal of the major fault lines in modern India- the constant clash of modernity and tradition. The material on a woman’s place in modern India from Bhanwari Devi to Nirbhaya from Ismat Chughtai to Sunitha Krishnan that are most insightful and touches the most. She wrote in depth analysis of the issues like Gender equality, terrorism, Kargil & Kashmir.

Writing has emerged as a parallel career for many young professionals and businessmen, among the torch-bearers of this change has been the author of best-selling thrillers Ashwin Sanghi.

The Jaipur Literature Festival played host to the writer as he discussed his work with his publisher Sudha Sadhanand and acclaimed Bollywood actress Kajol. A voracious reader Kajol in the white cape was looking extraordinary gorgeous… Professing her love for reading, Kajol shared memories of growing up surrounded by stacks of books belonging to her mother.

She emphasized that people have grown “oversensitive” these days, but that doesn’t change her responsibility to express herself to the people at large. However, as public personalities, it is their duty to speak well and correctly. She said I have always said my ‘Mann ki baat’ and it is no different now. She claimed that the industry is free from “intolerance”, and that there are “no dividing lines, no caste, no creed (specific)” in Bollywood.  She said that writing is a very lonely kind of job and requires lot of patience. She believes “Women empowerment is only possible in this nation when a woman respect other women.  She feels with the right teaching and upbringing of a child regarding gender equality any change can be seen in the society.

The day kicked off when American photographer, Steve McCurry recalled walking into a tent to avoid the harsh 11 am sun in war-torn Peshawar, Pakistan and seeing her: Sharbat Gula, the green-eyed 13 year old girl who ended up being the subject to his most iconic portrait, the Afghan Girl. Steve McCurry talked at length about his inspirations, travels and life in general with historian and writer William Dalrymple. The conversation inevitably shifted to McCurry’s new book INDIA. The book includes photos of his personal journey and people he emotionally connected with.

On the concluding day a rousing debate on Is Freedom of Speech Absolute and Unconditional among the panel of Kapil Sharma, Salil Tripathi, P.Sivakami, Suhel Seth, MadhuTrehan, AnupamKher and Pavan Varma moderated by Sanjoy K. Roy grabbed the attention. The debate ranged passionately between issues of press freedom, national security and creative licenses for writers and artists. Strong political undercurrents prevailed throughout. To connect with the crowd famous actor Anupam kher delivered his speech in local dialect and said that India is the only country where we have freedom for speech. The final vote was against the motion, since the crowd was convinced by the arguments that reasonable restrictions should be imposed on freedom of speech, in order to retain it’s sanctity.

A huge crowd gathered at the Front Lawn to hear best-selling author Amish Tripathi. The session entitled Kaljayee where Amish discussed the art and craft of writing mythological fiction.

The literary festival ended on a high with record number of visitors. This time a 40% increase in recorded footfalls over the five days – a record number.The Festival has seen a doubling of international visitors from 33 different countries, This year the Festival welcomed over 360 authors and over 100 musicians. They participated around 200 sessions across 10 venues, including a return to the stunning Amber For and the Albert Hall.

Other notable moments over the past five days included Karan Johar’s candid discussion of his life, the searing story of Bant Singh, Gulzar reciting poetry, Javed Akhtar, Uday Prakash and Booker Winner Marlon James, the world’s top war reporters David Grossman, Christina Lamb, Don Mc Cullin and Samanth Subramanian gathered in a moving discussion based around their experiences, debates on major contemporary issues such as The Need to Listen: Dialogue versus Rhetoric with a panel including Sudheendra Kulkarni and Pinky Anand with Shashi Tharoor; sessions on Indo/Pak which drew large crowds to hear from speakers including Ayesha Jalal, Shahzia Sikander and Reema Abassi; Eyeless in Gaza which drew strong stories from Omar Barghouti, Molly Crabapple and Laleh Khalili.

This year the Festival awarded three prizes, the second edition of the Ojas Art Award which was presented to Santosh Kumar Dasand Mahalaxmi and Shantanu Das, as well as the first editions of the Shri Dwarka PrasadAharwal Award which was awarded to upcoming Hindi writer PrabhatRanjan and the KanhaiyaLalSethia Poetry Prize which was won by Rituraj.

The second year of Jaipur BookMark, the Festival’s sister publishing industry event concluded with the award of the first ever Oxford Bookstore Book Cover Prize, won by designer BenaSareen for the book, ‘Talking of Justice’ by author Leila Seth, published by Aleph.